Whether you’re organizing a frat party, hosting a homebrewed beer tasting, or running a taproom, brewpub or bar, the question is always the same: How long will the keg last?

Beer enthusiasts Kevin Beal and Lou Apostolakis got sick of asking, so they invented KegData. It’s an electronic keg coupler (the thing that hooks the keg up to the tap for dispensing beer) that can sense how much beer is left and report the data wirelessly.

Existing systems for measuring the contents of a keg rely on scales or flow meters—both of which can be expensive and fiddly, requiring manual calibration each time a keg is swapped. Beal and Apostolakis are tight-lipped about the way their patent-pending sensor works, but they say it’s designed to be totally hands-off: KegData attaches the same way as any other keg coupler, then calibrates itself.

Once installed, KegData tracks temperature, calculates the amount of beer remaining (including total ounces, percentage, and the number of beers remaining at various pour sizes), and automatically disconnects itself when there’s nothing but foam left.

KegData transmits over MiWi, a Zigbee-compliant wireless protocol that’s unique to Microchip Technology components. Data goes to a local hub that connects through Wi-Fi to the KegData servers, and users can access status updates about their kegs through the company’s web app. Each hub can manage two dozen KegData couplers, and both the hub and the couplers take direct power from an outlet so battery life is never an issue.

Once installed the device can act as a service avatar for distributors – automatically check on beer level for any restaurant that has authorized them, run usage reports based on geography, and initiate automated ordering based on preset levels. 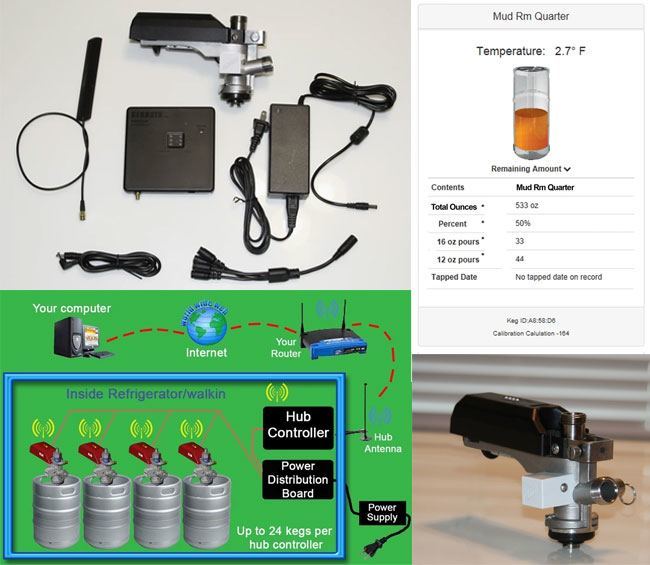 The system is also suitable for home use with a single keg. Beal tells Postscapes that the company has been beta-testing KegData in a few restaurants, and so far “everyone loves it.” Sales will begin after KegData debuts at the Nightclub & Bar trade show in Las Vegas at the end of March.

See a demo of the system working on a keg at Beal’s home bar setup in the video below.