IBM recently published a pair of white papers about ADEPT, a proof-of-concept demonstration of a decentralized network infrastructure for the Internet of Things.

Empowering the Edge: Practical Insights on a Decentralized Internet of Things lays out the vision of a peer-to-peer network based on open-source protocols that lets devices send messages, transfer files, and conduct transactions with one another—all autonomously. A companion paper describes specific use cases that IBM built in collaboration with Samsung and revealed at CES back in January to show an ADEPT network in action.

In one set of use cases, a common household appliance like a washing machine is able to automate processes like ordering more detergent when supplies run low, or hiring a technician to replace a failing part. Through a combination of sensors, software and peer-to-peer networking, the machine can tell when its detergent reserves are depleted; access online marketplaces to seek out the owner’s preferred brand; negotiate the price with the vendor; place an order for delivery; and arrange payment. Similarly, it can perform its own diagnostics and recognize maintenance needs; solicit bids from local repair services; confirm warranty information; and schedule and pay for a repair visit.

The washing machine can also negotiate with other smart devices on the home network, such as a television, to minimize their collective power consumption—perhaps by accepting a trade of energy credits from the television in exchange for delaying the wash cycle until after the homeowner’s favorite program has ended. 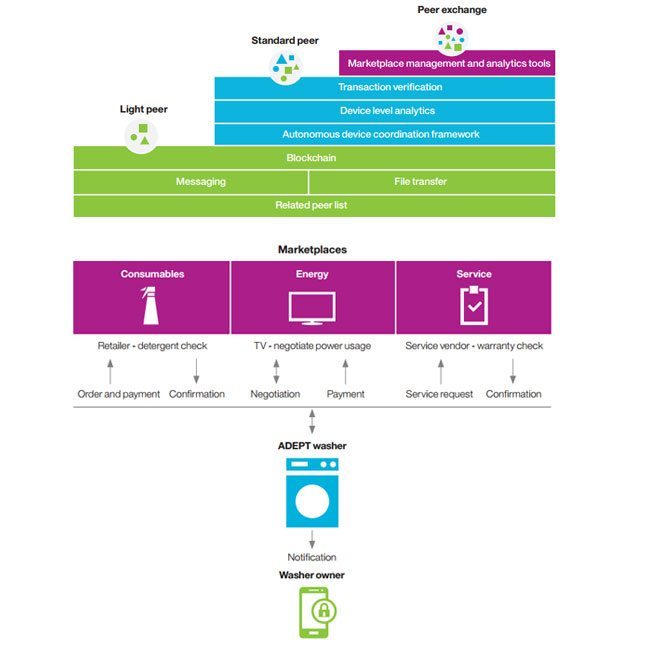 ADEPT, which stands for Autonomous Decentralized Peer-to-Peer Telemetry, allows all of this to happen by leveraging three open-source peer-to-peer protocols: Telehash for messaging (like sending the command that tells a smart lightbulb to turn on), BitTorrent for sharing files (like sending logs of diagnostic data to a repair service), and Ethereum for transactions (like sending money or exchanging other commodities).

Ethereum is a kind of blockchain—a collectively-maintained ledger by which devices on a network verify transactions for one another without the need for a trusted central authority. Blockchains are closely associated with cryptocurrencies like Bitcoin (for which the technology was invented), but can be applied to any kind of transaction with some modifications. Notably, ADEPT’s use of blockchains has no need for the kind of escalating computational difficulty associated with Bitcoin “mining”, which prevents inflation of digital currencies.

Paul Brody, who was one of the architects of ADEPT and a co-author on the white papers before leaving IBM in January, has said that an IoT blockchain only needs enough complexity to provide “sufficient security that the blockchain itself functions.”

ADEPT’s use of blockchains builds on the ideas laid out in a previous IBM white paper titled Device Democracy, in which Brody and co-author Veena Pureswaran argued that blockchains are the ideal technology for networks in which an increasing amount of computing power lives at the “edge”—i.e. in sensors, appliances, smartphones and other distributed devices.

To learn more about the potential applications of blockchains for the IoT, check out our handbook on Blockchains and the Internet of Things. There’s also a video below from TheProtocol.TV showing the ADEPT proof-of-concept in action at CES, and you can hear Paul Brody discuss ADEPT, blockchains and the IoT in a recent Epicenter Bitcoin podcast (they get into it starting at about the 25-minute mark).