The Internet of Things has the potential to transform many industries by forging real-time connections between people, machinery, environmental conditions and business processes. Implementing comprehensive IoT solutions can be challenging, however, and is even more difficult when the operation takes place underground.

Ironically, mining—one of the heaviest industries, where the ability to remotely monitor personnel and and control equipment can have the biggest impact—is a case where the usual suspects for IoT connectivity run into a literal mountain of hurdles. The radio signals that carry cellular, Wi-Fi, RFID and other wireless data are just not good at penetrating rock and soil.

Nevertheless, a number of mining operations have begun to partner with technology companies to invent creative solutions for deploying wireless networks underground. Along the way they’re keeping better track of employees and equipment, increasing safety, improving maintenance and boosting efficiencies.

Here are a few examples and case studies that point the way toward the future of connected mining:

Since 2008, Rio Tinto’s pit-mining operations in the Pilbara region of Western Australia have used self-driving vehicles to move ore around. A fleet of 53 massive dump trucks comprises the Autonomous Haulage System. Each AHS vehicle is loaded with more than 200 sensors, a GPS receiver, and a radar guidance system. The fleet is managed from an operations center in Perth, more than a thousand miles away.

The trucks follow pre-set routes between loading, dumping and processing areas of the facility, while also dynamically navigating roads and intersections. Any personnel entering the area do so in vehicles that are hooked into the AHS system, so the self-driving trucks—and the remote operations managers—always know where they are.

For now, those on-the-scene humans remain necessary to operate other mining equipment and coordinate site management by tweaking truck routes and dump locations. But over the long term, Rio Tinto hopes to remove people from repetitive tasks and dangerous environments as much as possible. To that end, the company has piloted an autonomous drilling system that it plans to roll out to other facilities in the near future. It’s also building an automated rail system to transport ore over longer distances.

At the operations center, data from the trucks and other equipment, on-site personnel, and geological instruments is collected into a comprehensive Mine Automation System. The software gives operations managers a real-time, big-picture view of the entire mining operation, including 3D visualizations of work sites and predictive maintenance schedules. 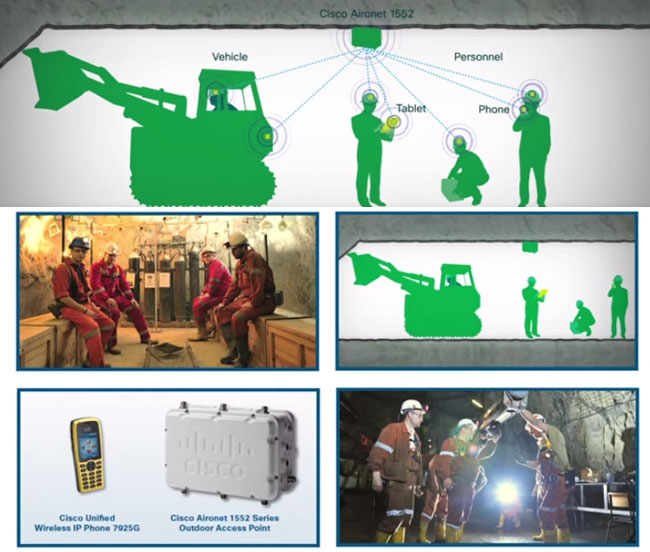 Dundee was one of the first companies to bring wireless networks into an underground mine, starting in the early 2010s at its copper and gold mine in Chelopech, Bulgaria. The goal was to use a combination of RFID and Wi-Fi to track the location of equipment and people and allow personnel to stay connected to the surface.

The backbone of the system is 55 miles of fibre optic cable, studded with Wi-Fi access points. Though the project began with standard Cisco routers, the difficult environmental conditions in the tunnels forced a number of customizations. Quartz in the walls scattered the Wi-Fi radio waves, so Dundee added range extenders and built dish-shaped antennas to focus the signals. Then the routers had to withstand physical hazards like water, falling rock, and the occasional bump from a vehicle or large machine. The company went through a number of enclosure designs before settling on a military-grade plastic.

Once the network was in place, communication became reliable and instantaneous even at the bottom of the mine, nearly 2,000 feet down. Miners can bring laptops and smartphones into the mine to stay connected to personnel and software on the surface. And with an RFID tag on every vehicle, machine, and hard hat—plus additional sensors reporting operational data and diagnostics—managers can see the location of everyone and everything in the mine, prevent accidents and breakdowns, and coordinate operations in real-time.

When Goldcorp began construction on the Éléonore gold mine in northern Quebec, it partnered directly with Cisco to deploy a comprehensive underground wireless network throughout the mine. As commercial operation begins in earnest early this year, 90 percent of the tunnels have Wi-Fi coverage and every employee, vehicle and piece of equipment is tagged with RFID.

The RFID location system combines with sensor and on-board diagnostic data from machines and vehicles to give operators a real-time view of everything going on in the mine. Because they know where everyone and everything is and how the work is going, managers can easily coordinate operations, predict maintenance needs, and respond quickly to changing conditions. Miners are constantly connected to the surface through Voice-over-IP services, email, and apps, and can be instantly located in an emergency.

There are also environmental and cost-cutting benefits. Using location data, an automated ventilation system responds to the needs of operations to minimize energy consumption: Fans turn on and off as miners enter or leave an area, and fan speeds are automatically adjusted whenever nearby vehicles and machines are running to make sure that exhaust and emissions are properly dispersed. This cuts the mine’s ventilation needs in half.

Read More: Goldcorp Raises the Bar and Builds the ‘Mine of the Future’ (Cisco Blogs)

Totten Mine, in the Sudbury Basin of Ontario, is a relatively new mine that will reach full-scale production in 2016. Vale has partnered with ABB Canada to incorporate many of the technologies introduced at other mines in recent years, including a wireless network that provides VoIP services and can track the location of people and equipment, and a centrally-controlled adaptive ventilation system.

Read More: Vale Inco Envisions the Mine of the Future (Control Global) 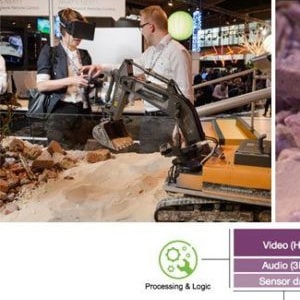 Telecommuting may seem like a white-collar job, requiring an office full of webcams, speakerphones and high-resolution displays just to remotely attend a staff meeting. But as smart connected cameras and other sensors permeate industrial facilities and equipment, it’s becoming more and more plausible that we’ll one day think it’s normal to operate heavy machinery remotely.

Last year a team of researchers at Ericsson decided to find out just what it would take to allow someone to safely and efficiently control an excavator — the kind of earth-moving machine you might see at a mine or construction site — without ever leaving home. They demonstrated a proof-of-concept model at last year’s Mobile World Congress (which is happening again this week in Barcelona).

As you might expect, an industrial worker’s telecommute is much more high-stakes than that of your typical office drone. An excavator can be dangerous enough when a trained operator has their hands directly on the controls — for someone to run it remotely requires, in the words of Ericsson researcher Robert Swain, “an experience of controlling the machine that is as good as, or better than actually sitting on-site in the driver’s seat.”

To create that better-than-the-real-thing experience, the operator needs to be fully aware of situation around the worksite. That means real-time streams of video and audio, as well as machine performance data and other environmental sensor feedback.

In the Ericsson Research prototype, the model excavator (a small robot arm in a sandbox landscape) is outfitted with a smartphone with a 360-degree camera lens. Audio and video from the phone are streamed to an Oculus Rift headset, which maps the full-circle images onto a virtual environment. A standard video game controller sends commands to the digger.

Though it’s only a rudimentary set-up, the model demonstrates that it is possible to control the machinery pretty smoothly even without perfect feedback. “It really is a surprise, even to researchers and engineers working on the project, just how quickly you become immersed in the experience,” Swain wrote at the Ericsson Research blog. Before it could be deployed in the field, however, the system would need improvements to gather more and better-quality data, such as a second camera to present the worksite in stereoscopic 3-D and allow for depth perception.

The other challenges with remotely-operated machinery are latency — the time between moving the controls, the machine’s response, and the results being sent back to the operator — and the reliability of the connection. Latency must be extremely low (less than 50 milliseconds), and reliability high, so the operator can detect and respond to obstacles, malfunctions, and other hazards. That means future telecommuters will depend on next-generation networks, such as the 5G mobile standard, to prove that the infrastructure is up to the task.

But with the right sensors, the right software, and the right network, it might soon be possible to work in heavy industry while sitting on your couch in your pajamas (hard hat optional).

See for yourself in the video below.

IntelliSense.io provides a cloud platform for the natural resources industries with a focus on mining operations.

MISOM offers system integration and solution services for the mining and minerals industry.