The DAQRI “smart helmet” is what you’d get if you crossed Google Glass with a hard hat. One part safety gear, one part wearable computer, it’s designed to layer augmented reality over the industrial workplace.

With a sensor package that includes four HD cameras for 360-degree awareness, a 3D depth sensor and an accelerometer, DAQRI builds up a sophisticated model of the environment and the wearer’s movement through that space — and shares it with other users, to create an even more complete representation. Algorithms for text and object recognition support a contextual display that, it’s claimed, can do everything from logging the number indicated by a needle on a pressure gauge, to creating a digital “highlight” around specific machine parts during a repair operation.

It all runs on Android, which means developers can integrate DAQRI with mobile apps as well. And while employees can receive instructions and control the digital overlay to display useful information about the work environment, DAQRI’s sensor data also feeds back to centralized software that can combine data from throughout a facility to monitor safety issues, or model the day-to-day progress of a construction project from the 3D models created by the many helmet cams that have been moving through the site. 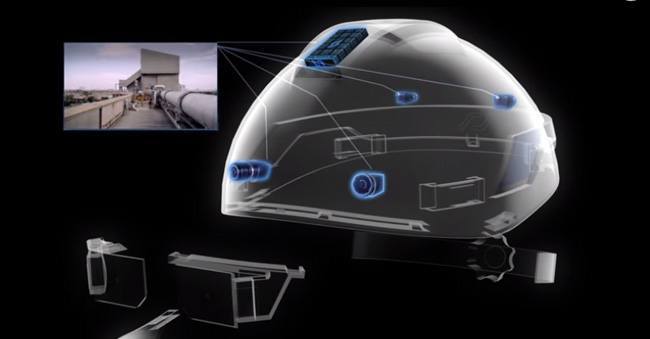 As a wearable, DAQRI packs computational chops equal to the rugged industrial environments its designed for: two Qualcomm Snapdragon chips and a battery with enough juice to keep them and the sensor package running for a whole shift. That sort of processing power isn’t cheap, however, so each helmet is expected to be priced similarly to a laptop.

Bringing augmented reality into the workplace is a big leap for DAQRI, which has so far built up a portfolio of projects integrating AR overlays with catalogs and magazine covers — the sort of thing people view with their smartphones as a curiosity, but which has yet to catch on as a daily experience for most of us. But DAQRI is counting on AR taking off along with the industrial Internet of Things, where it has a clear niche to fill and can be useful all day, every day.

DAQRI is expected to launch the smart helmet, along with the industrial version of its “4D Studio” software for managing AR in the workplace, in the coming weeks. Visit the company’s website to learn more and sign up for updates, or check out the video below.