Wellntel is a system that lets homeowners, small farmers, and soon big agricultural operations keep track of the water table that feeds their wells. It combines a sonar-like device, a long-range radio stack, and cloud services to provide detailed, accurate and timely groundwater readings.

“Groundwater has always been the unmeasured resource” for many well owners, Wellntel co-founder Nicholas Hayes tells Postscapes. Traditionally, reading well water levels was a matter of either sending someone out to drop a line manually, or installing expensive equipment. But as climate change, population pressures and heavy agriculture have put greater stress on underground aquifers, it’s become more important to have up-to-date data on the water supply. So Hayes and co-founder Marian Singer set out to create a system that would take reliable remote measurements, and be affordable and simple enough for the average homeowner.

Wellntel’s battery-operated sensors are installed at the wellhead, at or just beneath ground level. To read the water level, Wellntel uses a “digital listening technology” that resembles sonar. But whereas sonar implies the simple ping of a submarine or a bat’s echolocation, this is a bit different. The sound generated by the sensor encodes specific digital information, which Hayes calls a key or signature, that reverberates down through the well. Instead of a simple echo, the sensor listens to the complex changes in the key as it passes through various materials, including the pipes, pumps and wires that a basic ping might mistake for the water table.

Sounding data is sent wirelessly to an ethernet-connected hub back at the house, and from there to a cloud service for processing. Over time the algorithm learns to “hear” the shape of that particular well, and is able to screen out obstructions and external noises (like dripping water) to isolate the signal that reflects the current water level. 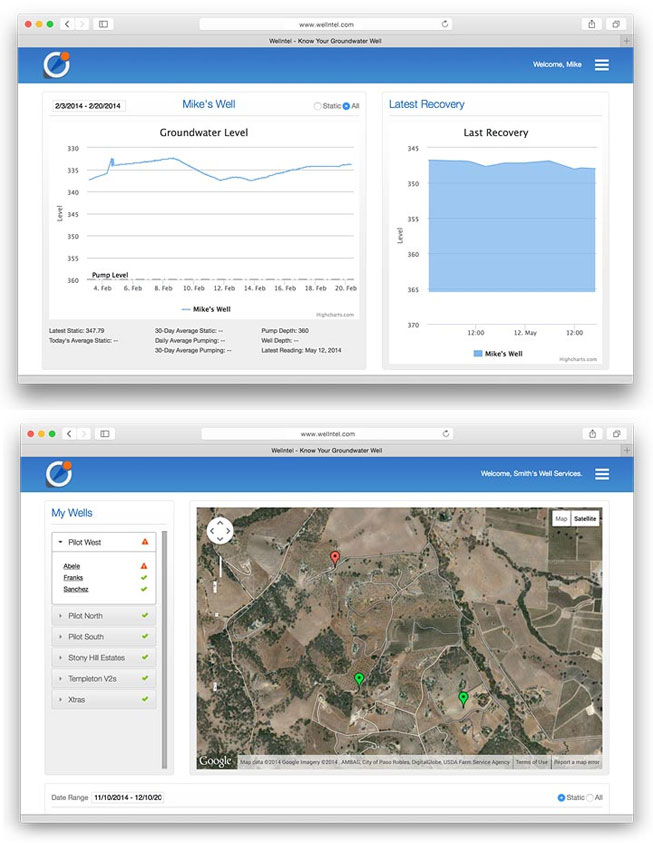 Wellntel’s proprietary 915MHz radio is designed to be reliable over long outdoor distances. Hayes says it’s passed tests of up to a mile through dense obstacles like buildings and hills, and three miles or more unobstructed. While the sensor can store data at the wellhead in the case of signal interruptions, it’s designed to delete local information as soon as it’s transmitted so there’s no data to be accessed through tampering.

Currently, Wellntel’s solution is suitable for small-scale properties like a home or small farm with one or maybe two wells. By the summer, the company plans to scale it up for use at larger farms with multiple wells. That will involve more ways to power the sensors — for instance, direct line power or a solar panel with battery backup — and additional connectivity options such as 3G/4G modems. There’s even the potential to piggyback Wellntel data on a farm’s existing data infrastructure, or to allow other farm equipment to piggyback data on Wellntel’s radios.

To learn more, visit Wellntel.com or look for the company at the Mountain States Groundwater Expo in Nevada in a couple of weeks.

Check out the video below to see how the system attaches to a well.