BeagleBoard Foundation announced earlier this week the launch of PocketBeagle, a tiny single board computer aimed at beginners and professionals. It’s a low-cost Linux-based expansible computer capable of being used in robots, drones, and 3D printers.

Termed as a competitor of Raspberry Pi Zero, the PocketBeagle has some nifty features with an estimated price tag of $25. It’s based on Octavo Systems OSD3358 system-in-package (SiP) device with 1GHz ARM Cortex-A8. Plus, it has 512MB DDR3 RAM, 2×32-bit 200-MHz programmable real-time units (PRUs), 3D Accelerator, 72 expansion pin headers, and finallymicro-USBB host/client and microSD connectors.

The PocketBeagle may directly compete with the $10 Raspberry Pi Zero. RPUs in the PocketBeagle make sense in handling little tasks with low latency and low overhead, whereas the ARM does the heavy lifting of handling high-throughput applications on the board.

The nearest competitor Raspberry Pi Zero was also launched amid much fanfare and was covered by Postscapes when it first launched in March this year.

A more complete line of competitors in the space can be found in our IoT Hardware Guide. 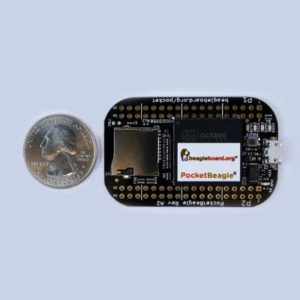