Learn what Bluetooth iBeacon and beacon technology is and what development systems and kits are available.

Below we take a look at some of the companies that offer package solutions including beacons and proximity-based content management systems, as well as an overview of the technology and some articles and resources to get you started:

The term iBeacon gets thrown around a lot in this area, but that refers specifically to Apple’s iOS protocols, while beacons can take many forms, come from a variety of manufacturers, and can communicate with most recent-model smartphones. Generally, a beacon can be any device that broadcasts a simple “Here I am!” signal, typically over Bluetooth Low Energy.

Most beacons don’t transmit or receive content -- that’s handled by smartphone apps and cloud services. The app knows which beacons are near, the cloud service knows where each beacon is located, and working together they can deliver content that reflects the user’s immediate surroundings (Generally up to about a 20-50 meter distance).

For retailers, this means they can target ads, coupons, and other content to customers based on which shelf they’re standing in front of, or which section they’re lingering in. They can also collect analytics about the way shoppers move throughout the store, which displays are attracting the most attention, and more.

Unlike some other retail analytics technologies, beacons generally require the user to opt-in by installing an app -- so you won’t have this stuff forced upon you. But there are lots of potential advantages beyond couponing. A location-aware app could make finding product reviews and other information a lot easier, and anyone who’s ever been lost in a large department store knows how useful it would be to have a digital map that can give you turn-by-turn walking directions back to the cash registers. 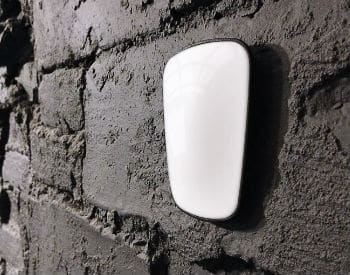 Description:
"A Glimworm Beacon is a small transmitter that uses Apple’s iBeacon standard to push messages to your customers when they are nearby.

The opportunities for proximity marketing, hyper local content, narrowcasting, customer service, and contact-less payment are simply too numerous to think about let alone write down. The results are simply mind-blowing." 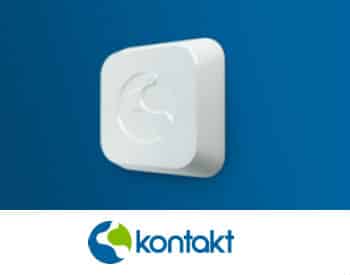 Description:
"Build your own iBeacon micro-location solution in less than an hour. We provide you with a content platform that allows to build micro-location apps without programming skills in no-time. Our Dev Kit includes all you need to start." 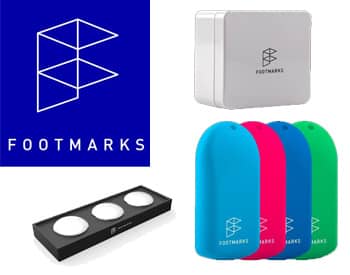 Footmarks’ SmartConnect™ is an experience-based analytics solution that delivers meaningful and personalized value through a secure end-to-end proximity-based solution. Designed for both our partners and clients, SmartConnect™ integrates seamlessly and rapidly for best-of-breed business solutions.

Footmarks is a Techstars company, and graduate of the first class of R/GA’s selective Connected Devices Accelerator." 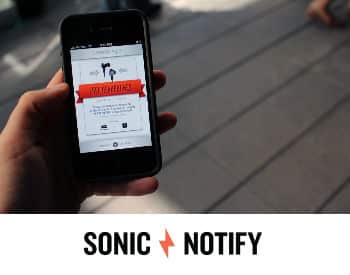 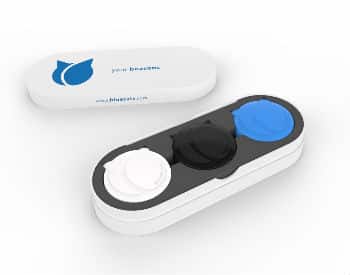 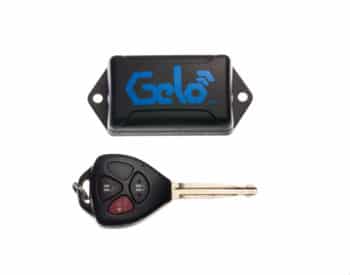 Description:
"Anyone can make a beacon. We're creating the most robust SDK and CMS. Our platform is being used far beyond retail and integrates easily into existing apps.

The patent pending GeLo System consists of Beacons, GeLo-enabled Apps & the Content Management System (CMS). Tags are deployed at any indoor or outdoor venue at Points of Interest or Wayfinding Points." 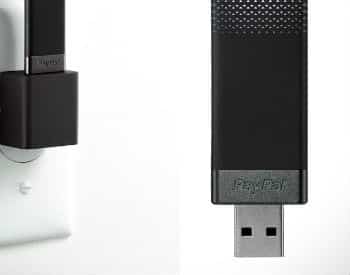 Description:
"PayPal Beacon is a Bluetooth Low Energy device to connect to a customer’s PayPal app when they enter a store. With one vibration or sound on your phone, you’ll know you’re checked in. And when you’re ready to make a purchase, all you have to do is say you’re paying with PayPal and the transaction is automatically completed: no cash, cards, taps, or signatures required—all hands free." 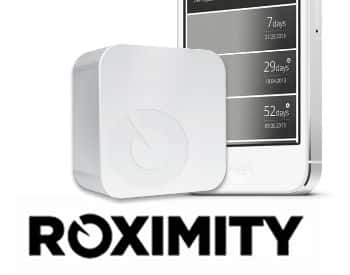 Description:
"Whether your customers are down the street or have just stepped inside, we’ll help you reach them with relevant and timely information they’ll appreciate — and begin to count on for guidance. The ROXIMITY Platform provides everything needed to create, manage and optimize mobile-marketing campaigns that both respect customers’ privacy and give sellers full control of the indoor, mobile experience." 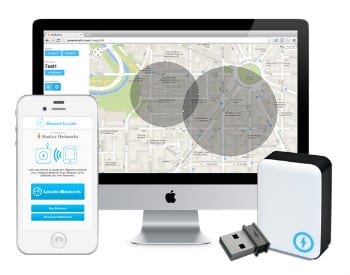 Description:
"Radius Networks proximity service platforms utilize a combination of mobile wireless technologies to detect the presence of visitors and the mobile devices they carry.

RadBeacon USB is a fully standalone proximity iBeacon implemented in a tiny USB package that can be powered by any available USB power source." 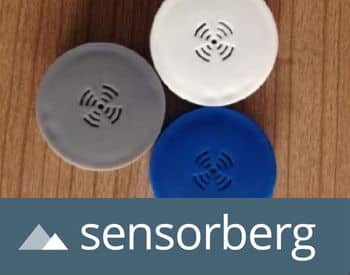 Description:
"Getting started is very easy. Register your iBeacon UUIDs in our Management System. Copy our code (SDK) into your app. Configure your own proximity notifications connected to your iBeacons. Websites, Offers, Pictures, Coupons, Social Profiles, all is possible." 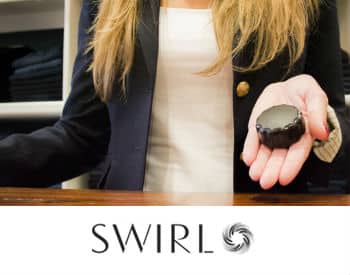 Description:
"Swirl's platform is robust enough to handle the needs of even the largest retailers but simple enough to deploy in a matter of days. Swirl's mobile client SDK can be added to existing mobile apps in less than a day and in-store indoor positioning beacons can be set up in any store location in a matter of minutes."

Many other companies offer stand-alone beacons that can be integrated with existing apps or used to build customized proximity systems. Some of the currently available options include: 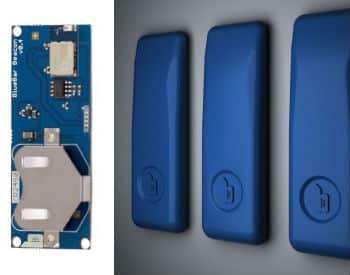 Description:
"The BlueBar Beacon is currently available to order in two variations – as an integration kit and as an end-user device. Key features of the BlueBar Beacon include being fully iBeacon compatible. Works with Android 4.3+ devices. Runs on a single CR2450 3V Lithium battery for up to two years and is CE, FCC, IC, Japan, and South Korea certified." 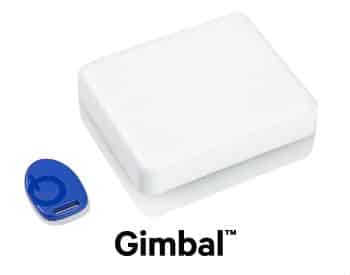 A look at some of the underlying software and protocols behind beacons. 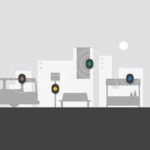 When it comes to popularizing Bluetooth beacons, Apple may have been first out of the gate with its iBeacon protocol — but Google is firing back with its own beacon protocol, Eddystone. And just as Android’s open-source model has held its own against iOS, Eddystone opens up the world of beacons to the many devices that live outside of Apple’s “walled garden” (while still remaining compatible with iOS).

Bluetooth beacons have a lot of different uses, from helping users navigate the interiors of buildings to creating interactive advertising and retail displays. A beacon is simply a Bluetooth transmitter that sends out a one-way signal like the ping of a submarine’s sonar. When a user’s mobile device receives the signal, it can take action depending on what message the signal contains.

As with Google’s Physical Web project, one possibility is to broadcast a URL that links to a specific web page associated with the object the beacon is attached to — like a bus stop that could link to route maps, fare tables and schedules — and In fact, the Physical Web will soon be changing over to the Eddystone protocol. Other messages could point toward content in an app the user already has installed or broadcast information about the beacon itself, like its current battery charge or its latitude and longitude (for placing users more precisely on a map).

Those different kinds of ping are called “frames”. Eddystone currently includes several of the most basic ones, including the device’s unique ID, a URL, telemetry (diagnostic data), and “ephemeral ID” — a kind of secret identifier that only authorized users can decrypt, which would be useful for creating private beacon networks or tagging luggage so you can find it at baggage claim. The platform is designed to be expandable, so new frame types can be expected down the road.

Accompanying Eddystone are several APIs. The Proximity Beacon API allows for managing fleets of beacons and associating new content with existing beacons, while the Nearby API lets developers integrate beacon signals into mobile apps to create location-aware experiences. Beacons can also be used to improve location sensing via tools like Android’s Place Picker, and beacons will soon be included in the contextual information presented by Google Now.

As it did with Android, Google is releasing Eddystone into the wild as an open-source beacon framework. The APIs, however, are proprietary — but technically, they’re not required for setting up and using Eddystone beacons (they just make it a lot easier). Meanwhile, hardware development is left to others. A number of companies are already on board to produce Eddystone-compatible beacons, including Blesh and Estimote.