A closer look at who coined the term and the background evolution into today's trending topic.

Considering how much we use the Internet of Things term we thought it would be helpful to look at the origin of the term and who were some of the important people and projects that helped move it from its first glimpses into today’s trending topic.

According to Kevin Ashton the then executive director of the Auto-ID Center he coined the term "Internet of Things" in 1999 while working on a presentation for Procter & Gamble in the context of RFID supply chains. - Full article

If you are looking for a longer more comprehensive look at the technologies and ideas that gave rise to the IoT continue reading. 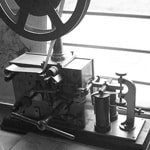 1832: An electromagnetic telegraph was created by Baron Schilling in Russia, and in 1833 Carl Friedrich Gauss and Wilhelm Weber invented their own code to communicate over a distance of 1200 m within Göttingen, Germany. 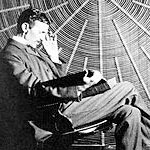 1926: Nikola Tesla in an interview with Colliers magazine:

"When wireless* is perfectly applied the whole earth will be converted into a huge brain, which in fact it is, all things being particles of a real and rhythmic whole.........and the instruments through which we shall be able to do this will be amazingly simple compared with our present telephone. A man will be able to carry one in his vest pocket." 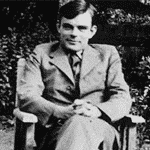 1950: Alan Turing in his article Computing Machinery and Intelligence in the Oxford Mind Journal (Via @Kevin_Ashton)

"...It can also be maintained that it is best to provide the machine with the best sense organs that money can buy, and then teach it to understand and speak English. This process could follow the normal teaching of a child." 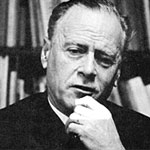 "....by means of electric media, we set up a dynamic by which all previous technologies -- including cities -- will be translated into information systems" 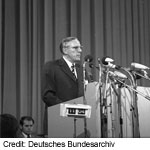 1966: Karl Steinbuch a German computer science pioneer said "In a few decades time, computers will be interwoven into almost every industrial product" 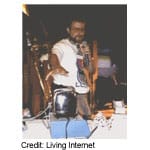 1990: Considered the first IoT device, John Romkey created a toaster that could be turned on and off over the Internet for the October '89 INTEROP conference. Dan Lynch, President of Interop promised Romkey that, if Romkey was able to "bring up his toaster on the Net," the appliance would be given star placement in the floor-wide exhibitors at the conference. The toaster was connected to a computer with TCP/IP networking. It then used an information base (SNMP MIB) to turn the power on. (See also: Xerox PARC networked coke machine) 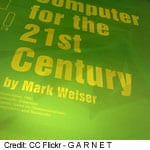 1991: The first web page was created by Tim Berners-Lee

“The most profound technologies are those that disappear. They weave themselves into the fabric of everyday life until they are indistinguishable from it”. 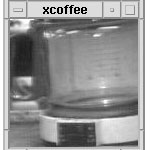 1993: Created by Quentin Stafford-Fraser and Paul Jardetzky the Trojan Room Coffee Pot was located in the 'Trojan Room' within the Computer Laboratory of the University of Cambridge and was used to monitor the pot levels with an image being updated about 3x a minute and sent to the buildings server. It was later put online for viewing once browsers could display images. (via @snim2)

1995: The Internet goes commercial with Amazon and Echobay (Ebay) 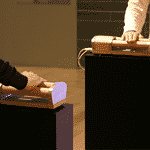 1998: inTouch a project at MIT was developed by Scott Brave, Andrew Dahley, and Professor Hiroshi Ishii (Via: @mrosenblatt) 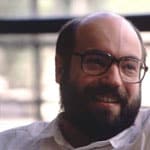 1998: A year before losing his battle to cancer Mark Weiser continues his explorations into the topic and constructed a water fountain outside his office whose flow and height mimicked the volume and price trends of the stock market. 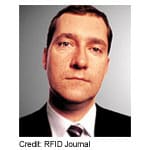 The Internet of Things term is coined by Kevin Ashton executive director of the Auto-ID Center:

"I could be wrong, but I'm fairly sure the phrase "Internet of Things" started life as the title of a presentation I made at Procter & Gamble (P&G) in 1999. Linking the new idea of RFID in P&G's supply chain to the then-red-hot topic of the Internet was more than just a good way to get executive attention. It summed up an important insight which is stil often misunderstood." - Full article 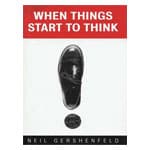 1999: Neil Gershenfeld was speaking about similar things from the MIT Media Lab in his book When Things Start to Think and when establishing the Center for Bits and Atoms in 2001

“in retrospect it looks like the rapid growth of the World Wide Web may have been just the trigger charge that is now setting off the real explosion, as things start to use the Net.”

"In the next century, planet earth will don an electronic skin. It will use the Internet as a scaffold to support and transmit its sensations. This skin is already being stitched together. It consists of millions of embedded electronic measuring devices: thermostats, pressure gauges, pollution detectors, cameras, microphones, glucose sensors, EKGs, electroencephalographs. These will probe and monitor cities and endangered species, the atmosphere, our ships, highways and fleets of trucks, our conversations, our bodies--even our dreams." - Full Article 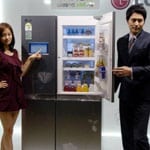 2000: Starting off what is now becoming a meme, LG announces it's first Internet refrigerator plans. 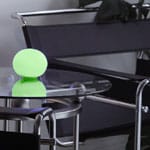 2002: The Ambient Orb created by David Rose and others in a spin-off from the MIT Media Lab is released into the wild (and is still on the market) with NY Times Magazine naming it as one of the Ideas of the Year. The Orb monitors the Dow Jones, personal portfolios, weather and other data sources and changes its color based on the dynamic parameters. 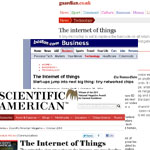 2003-2004: The term is mentioned in main-stream publications like The Guardian, Scientific American and the Boston Globe.

- Projects like Cooltown, Internet0, and the Disappearing Computer initiative seek to implement some of the ideas, and the Internet of Things term starts to appear in book titles for the first time.

- RFID is deployed on a massive scale by the US Department of Defense in their Savi program and Walmart in the commercial world. 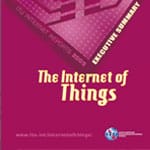 2005: The IoT hit another level when the UN's International Telecommunications Union ITU published its first report on the topic.

"A new dimension has been added to the world of information and communication technologies (ICTs): from anytime, any place connectivity for anyone, we will now have connectivity for anything. Connections will multiply and create an entirely new dynamic network of networks – an Internet of Things" 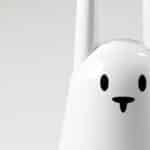 2005: Ahead of its time, the Nabaztag (Now a part of Aldebaran Robotics) was originally manufactured by the company Violet and created by Rafi Haladjian and Olivier Mével. The little WiFi enbabled rabbit was able to alert and speak to you about stock market reports, news headlines, alarm clock, RSS-Feeds, etc as well as connect to each other (see: Nabaztag opera). The statement was "if you can even connect rabbits, then you can connect anything" (via @inakivazquez) 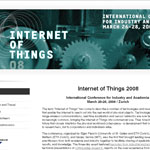 2006-2008: Recognition by the EU, and the First European IOT conference is held

2008: A group of companies launched the IPSO Alliance to promote the use of Internet Protocol (IP) in networks of "smart objects" and to enable the Internet of Things. The IPSO alliance now boasts over 50 member companies, including Bosch, Cisco, Ericsson, Intel, SAP, Sun, Google and Fujitsu. 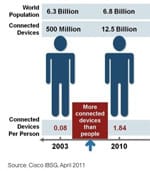 According to Cisco Internet Business Solutions Group (IBSG), the Internet of Things was born in between 2008 and 2009 at simply the point in time when more “things or objects” were connected to the Internet than people.

Citing the growth of smartphones, tablet PCs, etc the number of devices connected to the Internet was brought to 12.5 billion in 2010 (Related: see Kevin Kelly's One Machine), while the world’s human population increased to 6.8 billion, making the number of connected devices per person more than 1 (1.84 to be exact) for the first time in history. 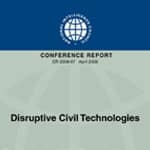 2008: U.S. National Intelligence Council listed the Internet of Things as one of the 6 "Disruptive Civil Technologies" with potential impacts on US interests out to 2025.

19xx-Present: A whole range of IoT platforms (Pachube, Thingspeak, etc), standards (6LoWPAN, Dash7, etc) hardware and software (Contiki, TinyOS, etc) have developed but the timeline details of each is outside the scope of the article.

2010: Chinese Premier Wen Jiabao calls the IOT a key industry for China and has plans to make major investments in it. 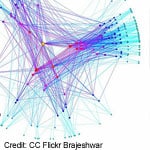 - Arduino and other hardware platforms mature and make the IoT accessible to DIY'ers taking interest in the topic.

- Acquisitions and VC investment in the space including the IoT platform Pachube being aquired, IoT security company Mocano raising a round of funding and other VC's taking notice of the industry. 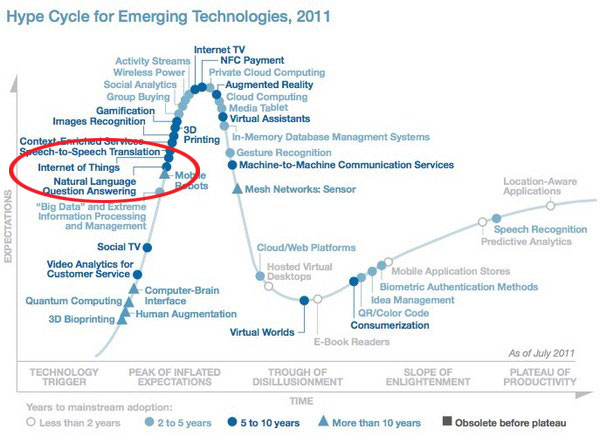 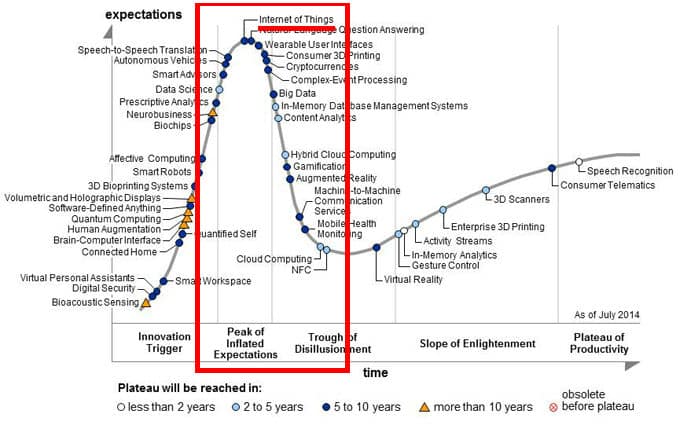 Gartner releases their 2012 Top 10 Strategic Technologies list at their 2011 Symposium.

The Internet of Things comes in as #4 on the list and they reference:

“The Internet of Things (IoT) is a concept that describes how the Internet will expand as sensors and intelligence are added to physical items such as consumer devices or physical assets and these objects are connected to the Internet. The vision and concept have existed for years, however, there has been an acceleration in the number and types of things that are being connected and in the technologies for identifying, sensing and communicating. These technologies are reaching critical mass and an economic tipping point over the next few years. Key elements of the IoT include: 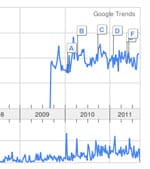 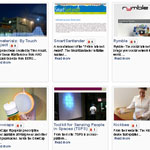 - Europe shows their continued interest and support in the subject with their ICT-FP7 Work Programme, IoT-A and digital future directives and the UK government grant (£5m) to develop the IoT in the UK

- China continues to fund and support developmental research in the field of Internet of Things at institutions like Shanghai Institute and the Chinese Scout of Sciences.

- The creation of the IoT-GSI Global Standards Initiative which promotes a unified approach for development of technical standards enabling the Internet of Things on a global scale.

Josh over at IoBridge stumbled across this 3 minute clip from the Big Bang Theory originally aired on March 17, 2008 called “The Cooper-Hofstadter Polarization” .

In the clip they reference x10‘s and connect their lights, stereo and remote control cars for open web access.

Josh’s more detailed description of the clip can be seen here.

Two members of the U.S. House of Representatives announced in Jan of 2015 that they’re forming a Congressional Caucus on the Internet of Things.

California’s Darrell Issa, a famously pro-Internet-freedom legislator who chairs the Subcommittee on Intellectual Property, is teaming up with Suzan DelBene, a technology entrepreneur who represents the state of Washington.

The caucus will keep lawmakers abreast of the rapidly developing IoT industry, helping them understand the best ways to promote innovation and preparing them for the inevitable debates about privacy, spectrum management and other issues.

“It’s important that our laws keep up with technology,” Rep. DelBene said in the announcement. The goal of IoT regulation should be to “protect consumers while also enabling these new technologies to thrive,” she said.

With 50 billion connected devices anticipated by 2020, Congressional leaders will need to have “informed policy discussions about the government’s role in access and use of these devices,” Rep. Issa said.

Greater awareness of the importance of IoT technologies could also motivate Congress to take more decisive action on research, an area in which the U.S. government is being outshone by the European Union and the private sector.

While looking into the next stages of this term and technologies there are many oportunities and challenges to face including privacy concerns, security, costs, standards, regulations, and the list goes on.

Where do you think the IoT is evolving to next?