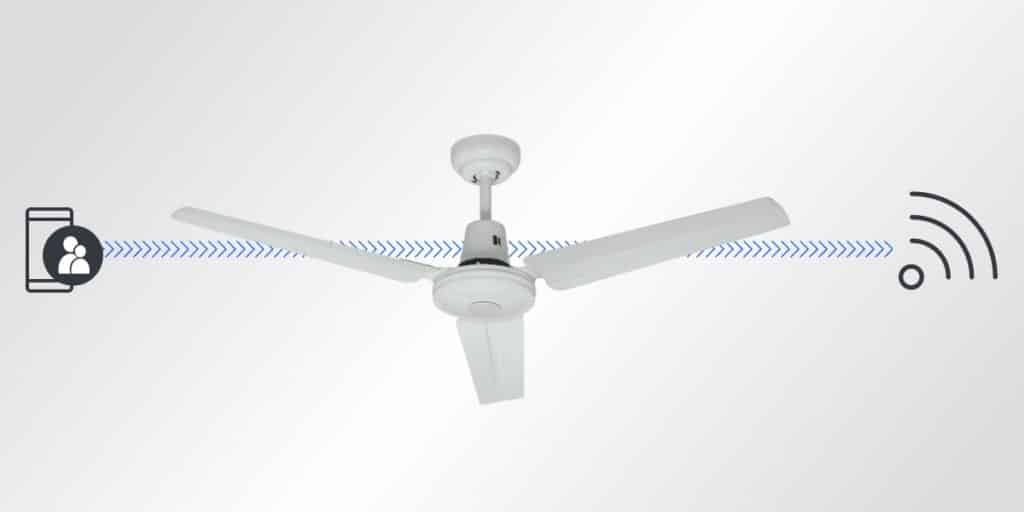 Smart Ceiling Fans: Everything you need to know

Whenever the heat kicks in over summer, you end up in a battle between you and climate control. Most folks would advise you, “Why not get an air conditioner?”.

Yes, that’s the most obvious option. But running a regular air conditioner can take up to 12% of your homes energy, or for some your home simply cannot be equipped with one.

Why not try smart ceiling fans?

Yes, it’s not just your TV that’s getting smarter by the day. Ceiling fan manufacturers are also incorporating cutting edge technologies to make sure climate control in your house is as simple as asking Alexa or setting a schedule from your smartphone.

How? Why should I consider this over my regular ceiling fan?

Read on to find out.

How Do Smart Ceiling Fans Work?

Smart ceiling fans operate like your regular ceiling fan, only that they know when to spin and when to keep the air still. This means that you can program a preset temperature for it to adjust to, or a schedule within which the ceiling fan should operate

For some of the more advanced versions occupancy sensors and geolocation settings make sure it is only spinning when needed.

Unlike your regular ceiling fan where the only connection is a pull cord or wiring in your wall, smart ceiling fans operate via Wi-Fi or Bluetooth. This means you can remotely control and program them to operate within a given setting and schedule even while you are away from home from your iOS or Android device.

For people who prefer their older ceiling fans there are a few devices that let you convert your existing fans to a smart fan either by hardwiring a small device inside your fan, using a hub and your existing motorized blind IR remote control (See Bond Hub for an example), or replacing your dedicated wall switch with a Z-Wave or Zigbee version that connects and controls your fan.

How Much Do Smart Ceiling Fans Cost?

So what makes the difference in price?

For something on the lower end, expect a lower build quality – usually, the apps may also be buggy with a less refined app experience, and possible slower customer service.

If your budget is a bit low, then you’d rather upgrade your old ceiling fan to a “smart fan” using either a z-wave switch, infrared remote hub connection, or a hardwired Wi-Fi add-on.

For instance, the Bond control hub will take you back $95, but it can be connected to 6 ceiling fans. The GE Z-wave smart switch on the other hand only goes for $26 on Amazon.

One of the most notable brands in the smart ceiling market is Big Ass Fans,with their smart product line known under the Haiku brand of fans. This company has leverages its existing success to partner with major companies such as Amazon – for Alexa, Ecobee – for smart thermostats, EERO, and Google Assistant.

Apart from being among the best known, Haiku also sells among the most expensive smart ceiling fans.

Other notable players include:

Things Smart Ceiling Fans Can Do, and What You Should Look Out For

Smart ceiling fans can control your home’s ambient temperature by sensing the current temperature and deciding the kind of setting to use. They can also operate under a programmed schedule.

For control, most smart ceiling fans are integrated into smart home hubs and voice control technologies such as Amazon Alexa, Google Assistant/Google Home, Siri/Apple Homekit. However, you need Wi-Fi to operate most of these devices remotely while you are away from home.

Additional features to look out for:

How Do You Control a Smart Ceiling Fan?

Smart ceiling fans can be operated by either:

For a regular ceiling fan, you have to wake up and pull the cord or turn a switch. But for smart ceiling fans, you need Wi-Fi, Bluetooth from your smart phone, or a smart home hub to get the device working.

Are There Switches Available That Can Control Both the Fan Light and Fan Itself?

Yes. Most smart ceiling fan brands on the market offer independent fan and fan light control via the app interface. But if you are handy and comfortable doing a bit of wiring work (or call your electrician if you are not familiar with turning off your breaker) then you can replace your old wall switch with a smart switch that can be programmed to control the fan and its lights manually and independently as well.

Can You Convert an Existing Ceiling Fan into a Smart Fan?

Yes. In some cases, it may be financially unwise ditching your old ceiling fans for a new set that’s in love with “Hey Google”. So, if you wish to upgrade an old one, there are three options that you have:

This is a ceiling fan remote control kit that can be integrated with your old ceiling fan to add “smart” functionalities. By installing this kit, you’ll be able to wirelessly control your ceiling fan.

A ceiling fan remote control kit such as this one from Ostrich uses Wi-Fi to operate your regular ceiling fan. You can use the handheld remote to do this or the mobile app. Some of these kits can also be integrated to work with Alexa.

2. Using Your Existing Infrared Remote Control with a Control Hub

If your old ceiling fan came with an IR or RF remote control, then you can add advanced automation features using a control hub.

What a control hub does is that it records your remote inputs to play them later to the ceiling fans, at a set schedule. This way, you can have smart ceiling fan functionality.

You can also make use of a mobile app for added functionalities. These control hubs, such as Bond, can also be integrated with Alexa or Google Assistant.

3. Replacing Your Fan Wall Switch with a Z-Wave Switch

A Z-wave switch is used to connect smart devices in a smart home. Recently, these kinds of switches have gained popularity over Wi-Fi and Bluetooth connections thanks to their ability to connect devices from various manufacturers.

Examples of z-wave switches are the Honeywell Z-Wave Plus Smart Fan Speed Control Switch, and Lutron.

Can Smart Fans Be Integrated with Smart Thermostats?

Yes. If you have a smart thermostat such as Nest or Ecobee, then you can integrate your smart fan to it for more functionality.

For instance, Ecobee and Big Ass Haiku Fans are designed to work together. The Haiku Fan’s settings are adjusted based on the readings from the Ecobee smart thermostat, leading to better temperature control.

On the other hand, Nest can control fans as long as the needed wiring is available at your thermostat connection point.

Can Smart Fans Save you Money?

Yes, smart fans can be part of an energy saving solution for your home (and wallet). Using integration with temperature sensors instead of leaving your fans running all day long while you are away from home you can have them only turn on when your rooms temperature rises above a certain amount.

Bottom Line: Are they worth it?

If you want to add some additional control and scheduling  smart features to your room’s climate control but don’t know if you need a smart ceiling fan, here are some guidelines:

A smart ceiling fan is just one component of creating a more intelligent energy and utility bill saving home. Use the guidelines above to make a decision that is right for your home or check out our choice for Best Smart Ceiling Fan or product reviews to quickly narrow down your selection.